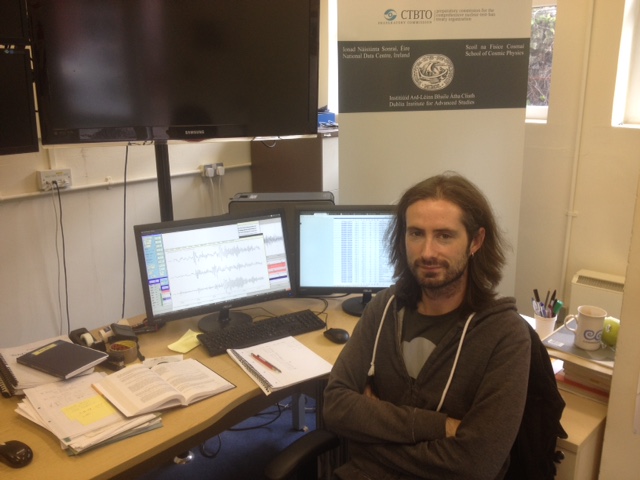 What are the main tasks and responsibilities?

I monitor the seismic data recorded by the Irish National Seismic Network stations, with the aim of detecting earthquakes. I locate and register both earthquakes and man-made seismic events with the Seismic Event Database. I also help maintain the School Outreach programme (Seismology in Schools) run by DIAS. We install seismic monitoring stations in schools, and demonstrate the basic principles of how earthquakes are detected and located to students and teachers.

I view the seismic data recorded by seismic stations around the country each day. I note any seismic events that occur (both distant and local events). I determine the location as well as other source parameters of the local seismic events. I also use the data recorded by the seismic stations to infer physical properties such as the speed of seismic waves through the Irish crust.

What do you find most interesting ?

The most interesting thing about my job is when I detect and earthquake that has happened in or round Ireland, or even further out towards the Mid-Atlantic Ridge. For these events, I am the first person to actually know that it has happened! I also like the research element in my job. Although this is more challenging, it is the most interesting part. Partly because I don’t have a background in seismology, this is where I learn about the material properties of the Irish crust first hand from the data we record.

What’s not so cool? What are the main challenges?

Part of my job requires me to test seismological software that is in the development stage – this can be very tedious!

How do you use mathematics within your job?

When I started, I was new to seismology, so I needed to read up about the basics. Because the subject has it roots in physics, all the background literature has a mathematical description. So a university level background in mathematics was extremely helpful in bringing myself up to speed in the subject when I first started. Most of my work is done using specialist software. However, some problems have been encountered which are outside the scope of this software. The best example of this (that I’ve come across in my job) is try to locate an earthquake which is happens far away from any monitoring station (as in the Mid-Atlantic). When you want to locate events like these with some precision, and you can’t do it with the software you have, the best option is to write your own computer program! Mathematics is used to both formulate and describe the problem you want to solve (the algorithm) as well as writing the program to implement it.

What type of mathematics do you use to solve problems?

When you want to locate an earthquake, you construct a mathematical approximation of the real problem you want to solve. In order to solve this problem, you need calculus, simultaneous equations and geometry primarily. For data analysis, I use curve fitting and line-of-best-fit for establishing relationships between quantities and statistics for seeing how much spread there is in my results.

Who or what has most influenced your career direction?

My father is an Applied Mathematician, so that had a pretty big influence on me!

Does your job allow you to have a lifestyle you are happy with?

The most important thing about my job is that I find it interesting. This has always been the main factor in my decisions regarding career paths.

I took honours Maths and Physics for leaving cert. If I had been able to, I would also had taken Applied Maths (only two of us wanted to take it in my year, so they decided not to teach it!). I also took Music for leaving cert. I am a Musician when I’m not working on seismology! These were the subjects I found interesting in school, and I wanted to develop these further when I went to college.

What is your education to date?

I went to Carrigaline Community School, in Carrigaline, Co Cork. I did my B.Sc. In Physics at UCC, and I also did a research M.Sc. in Applied Maths in UCC.

When I was in 1st year, I had the option of going on to specialise in Physics, Mathematical Sciences, or Chemistry. That was how the degree programme was run back then (2001!). I had initially thought I wanted to study Mathematics. But I had an amazing lecturer in Physics, so that made me switch to Physics.

You encounter lots of new mathematics in a Physics degree. After 4 years of encountering new Mathematics, there were some topics I still felt I didn’t understand. The reason being, we had a physicist’s explanation of mathematics throughout my degree – some can explain it perfectly, others not so well! So I went back and did an Applied Maths M.Sc. that would require me to fully learn all those areas I didn’t understand, while still be research, and not classroom orientated.

What aspects of your education have proven most important for your job? Were there any courses /subjects /modules that were particularly relevant?

My M.Sc was essentially mathematical modelling in Elasticity (how solids deform and behave on a large scale), with the theory of Elasticity being fundamental to the theory of Seismology. So that was useful. I had a course on Fourier analysis (analysis of waves) that is extremely useful also. Also, I had several numerical methods courses, where are extremely important for solving difficult mathematical problems approximately and programming a computer to solve this problems.

Did you like maths at school? What you found easy, what you found hard, how did you overcome these difficult parts of mathematics (if at all)?

Yes, I enjoyed maths at school. In fact, my study was pretty much divided into maths, physics and music!

I found proving theorems the most difficult part of maths, although we only did this up to Junior Cert. And also probability. Perhaps because I thought the triangle and circle theorems were abstract and uninteresting, and because the probability section of the course was so poorly explained.

I have since discovered very good quality books on probability!

My favourite part of the maths course was calculus. I found this extremely interesting, as now the rate of change was introduced, and it developed upon our knowledge of functions and graphs. It turns out, this revolutionised Physics. Later on, I discovered differential equations (which involve derivatives of unknown functions), which has been my number one area of interest mathematically.

What aspects of the mathematics curriculum or mathematics courses have proven most important for your job? Were there any courses or specialty branch of mathematics that were particularly relevant?

What other skills do you think someone should obtain if they wanted to pursue your career?

Computer programming is very useful, and I would recommend it. For seismology, a geology course would have been useful too!

What advice would you give to someone considering this job?

An interest in physics, earth science and mathematics would ideally prepare someone for entering into this line of work. Also working with raw data, and being able to compare models and predictions with data is very important, not just in seismology, but in the physical sciences in general

What kinds of work experience would provide a good background for this position?

A student internship while at college, or field work would be great ways of introducing yourself to the day to day work involved in this subject.