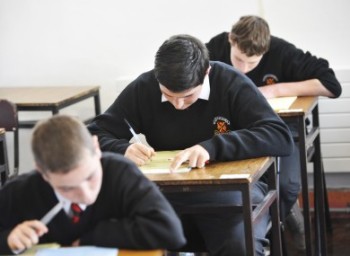 Each year policy-makers and employers watch whether Leaving Cert grades go up or down. A rise in the number of students getting “honours” – an A, B or C – as happened this year in higher level Irish, for example, is generally seen as a sign of rising standards.

But the issue is much more complicated. A Leaving Cert paper in 2015 may be much easier than the equivalent exam in 2014. Moreover, the curriculum and weightings for different types of learning change over time.

An added factor is the very fluid nature of the State Examinations Commission’s (SEC) marking scheme. To describe what they do each year as “rigging the grades” might be overstating it but the commission admits that it adjusts its markings to cancel out the effects of a very hard, or a very easy, paper.

A notable example this year was Paper 1 in ordinary level maths, which drew criticism from teachers, parents and students, who said the phraseology and complexity of a number questions was way out of kilter with the norm. The SEC issued examiners with a revised marking scheme after receiving submissions from everyone up to the Minister for Education Jan O’Sullivan. The result was the failure rate fell from 8.6 per cent to 5.9 per cent, and the proportion getting an A, B or C rose from 66.7 per cent to 73.7 per cent.

Aidan Roantree, a maths teacher at the Institute of Education in Dublin, described the adjustment in the ordinary level exam this year as “blatant” but not exceptional.

In a statement the SEC said a draft marking scheme was applied to a random sample of scripts to determine “the extent to which an examination and its marking scheme may be too hard or indeed too easy” and adjustments were made. Asked whether ordinary level maths was marked easier this year to avoid public criticism over Paper 1, the commission replied that it took on board the concerns expressed. But “contrary to the commentary that followed the examination which suggested that the ordinary-level mathematics paper one was “undoable” or “impossible to pass”, it was clear from the outset that candidates had no more difficulty than usual”